The Red Devils failed to convince the German to leave Dortmund for Manchester in 2013, meaning he instead ended up on Merseyside two years later

It was in September 2002 that Sir Alex Ferguson produced what is probably the most famous of all his quotes.

Manchester United had made a slow start to the new Premier League season. Pipped to the title by Arsenal the previous May, they now found themselves six points behind Arsene Wenger’s champions before autumn had arrived.

Alan Hansen, the former Liverpool captain, had claimed Ferguson was facing “the greatest challenge of his career”, a suggestion which prompted a predictably strong reaction from his fellow Scot.

Sitting down to talk with The Guardian’s Michael Walker, Ferguson got to work.

It’s a hell of a quote, even if it isn’t, strictly speaking, true. Liverpool’s decline had already started by the time Ferguson ended United’s 26-year wait for a league title in 1993. The Reds, dominant in the 1970s and 80s, were already a fading force.

The arrival of the Premier League ushered in a new era of dominance, of course. United have won 13 league titles since Liverpool’s last one.

Well, kind of. What, one wonders, does Ferguson make of the current situation at Old Trafford, where the club is still struggling to fill the void he left back in 2013? 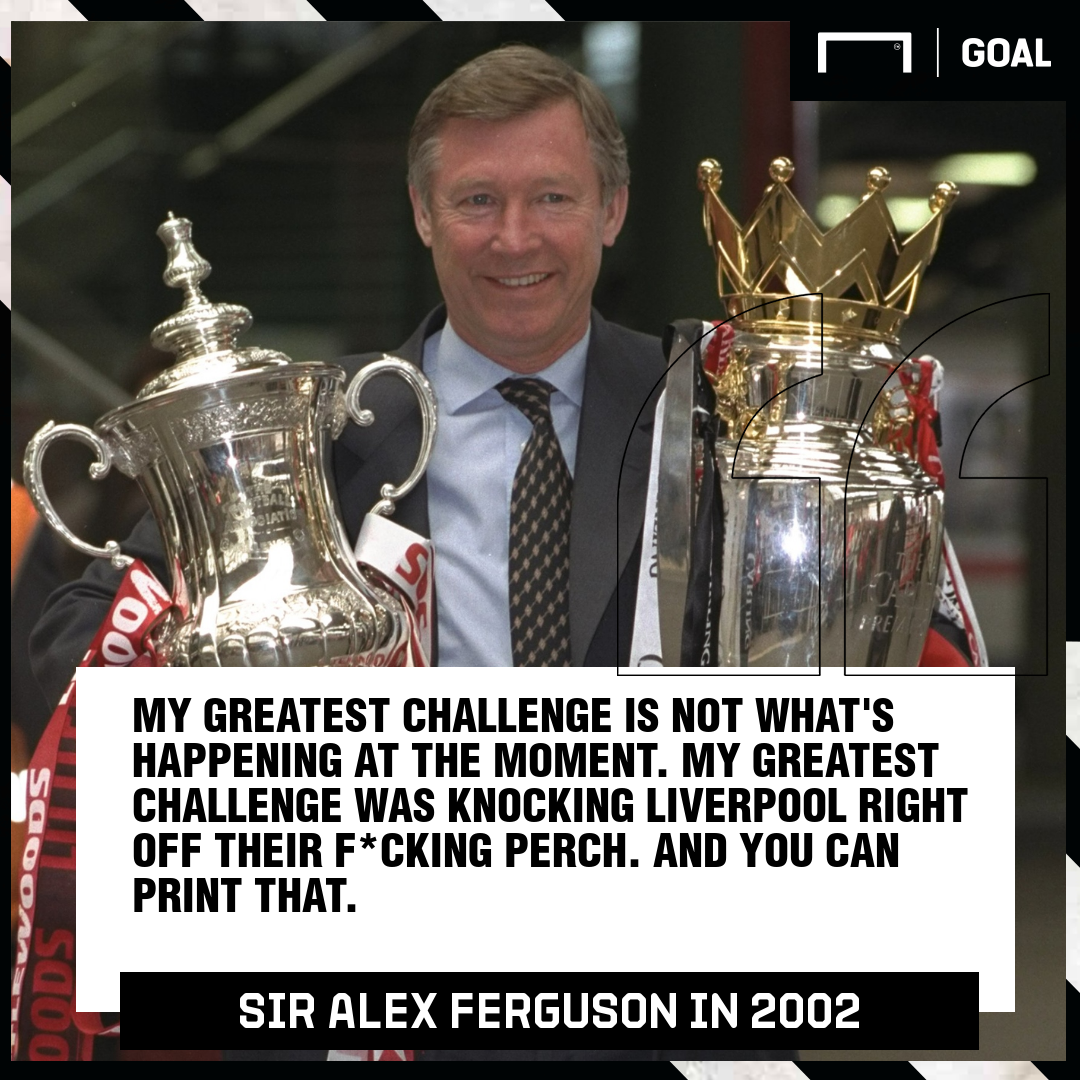 Since Ferguson left there have been no league titles and no fewer than four permanent managers. A heavy defeat to Liverpool on Sunday, and United could be looking for a fifth. Ole Gunnar Solskjaer’s position is far from secure, no matter what briefings are being given to the press.

The Norwegian, a Ferguson favourite as a player, has overseen the club’s worst start in three decades. United sit 12th in the table, haven’t won an away game since February, and their last 17 league games have produced just 17 points.

Liverpool’s last 17, by contrast, have brought 17 straight wins, and they can equal Manchester City’s all-time top-flight record with another success this weekend. The bookmakers have them as strong favourites to do so, even if they have only won five times at Old Trafford since 1990.

Right now, these are clubs heading in very different directions.

Liverpool, rock-solid behind the scenes and led brilliantly by Jurgen Klopp, are European champions and look well-placed to end that long wait for a 19th league title this season. Win on Sunday and they will be at least eight points clear – a remarkable margin after just nine games.

United, meanwhile, look a fallen giant, a club with huge resources and huge expectations, but which continues to make huge errors in its pursuit of former glories. Ferguson must be horrified at how things have unravelled.

He isn’t blameless, mind. How he must regret his insistence that David Moyes should be the man to follow him in 2013. Moyes, the former Everton manager, signed a six-year contract but lasted less than 12 months in the hot seat. His own career, really, has never recovered.

After his exit, United held initial discussions with Klopp about taking over at Old Trafford.

The German, then at Borussia Dortmund, rejected them after a face-to-face meeting, unimpressed by executive vice-chairman Ed Woodward’s bizarre claim that the club was “like an adult version of Disneyland", and unconvinced by the long-term football plan.

Louis van Gaal would eventually get the job, lasting two seasons before being sacked and replaced by Jose Mourinho.

How United must rue that particular episode. How it must have galled them to watch Klopp bide his time, take over at Liverpool and, step by step, turn the Reds into one of the world’s best sides, while Moyes, Van Gaal, Mourinho and now Solskjaer have all suffered.

There should be envy at Old Trafford at the way Liverpool are run, with the relationship between Klopp and sporting director Michael Edwards a key factor in their recent success. Their signings – Virgil van Dijk, Andy Robertson, Fabinho, Sadio Mane, Mo Salah and Roberto Firmino – would not have looked out of place in any of Ferguson’s great teams.

United’s strategy, meanwhile, seems to be based around spending and sentimentality. They have money but rarely use it well. This squad is perhaps their worst since the Premier League began. Woodward, the man taking the flak from supporters, signs sponsorship agreements far better than he signs players.

The parallels with Liverpool in the 1990s are clear: a muddled transfer policy, an obsession with the past, a lack of backbone and consistency, a disconnect between club and supporters and, perhaps most damning of all, a sense of entitlement and denial which filters down from the top.

For how long, one wonders, did Ferguson’s genius hold the club together?

The glory days certainly look a long way off now. United won’t be challenging for title No.21 any time soon. As things stand, they’ll do well to finish in the top six. They’re already 15 points off Liverpool, and the leaves are still on the trees.

Klopp spoke with respect ahead of Sunday’s game. “We expect the best Manchester United possible,” he told reporters at his Friday press conference. He would, though, love to add to Solskjaer’s woes by nabbing his first ever victory as a manager at Old Trafford.

If he gets it, it will rub salt into United wounds. Klopp could have been the man to keep their machine rolling, post-Ferguson.

Instead he’s leading Liverpool – finally – back towards that perch.